Cyclist pepper-sprayed and rammed by police car for not wearing a helmet
Last Tuesday Shaun Taylor was riding his bike to work in Nelson, New Zealand with
read more ...

The New Zealand helmet law came into effect from 1st January 1994. It applies to bicycle riders of all ages, but not to the riders of other types of cycle (unicycles, tricycles, quadricycles, etc). The NZ Government stated that the aim was to protect bicyclists from themselves, not from motor vehicle impacts.

The fine for not wearing a helmet is NZD 55. However, if contested in court and found guilty, the fine can rise to NZD 500 with court costs of up to NZD 130 extra.

Helmet fitting and the replacement of old and damaged helmets is poor.

Enforcement varies by region and the view of individual police officers. In some areas enforcement is rare while in others bicyclists report being stopped regularly. Every year or so some sort of 'blitz' campaign is launched, often at the start of the school or university year.
Scale of convictions: unknown. In one case a judge refused to fine a bicyclist riding without a helmet on the grounds of de minimis (too minor an offence to justify the court's time), but by nature of the type of court this has not set a precedent.

Scuffham, Alsop, Cryer and Langley, 2000 claimed that the helmet law led to a 19% reduction in head injury to cyclists over its first 3 years. This is similar to the reduction in cycle use (see below). However, Robinson (BHRF, 1237) showed that there had been no reduction in head injuries to cyclists over and above the general trend experienced by the population as a whole. The sudden large increase in helmet wearing by adults and teenagers was not accompanied by a change in trends in head injuries for these groups. Perry, 2001 has also shown that the changes in head injuries for cyclists matched those of the population at large and not the cycle helmet wearing rate. Detailed analysis

Cyclist fatalities since the helmet law have declined only slowly and inconsistently – most likely the result of random variation due to the small numbers involved: (IRTAD)

In 2006 it was reported that three-quarters of fatalities were still due to head injuries, although helmets were worn by 94% of cyclists (NZMT, 2007).

After an initial fall (but less than the decline in cycle use), hospital admissions of cyclists have increased since enactment of the helmet law: (NZMT, 2007) 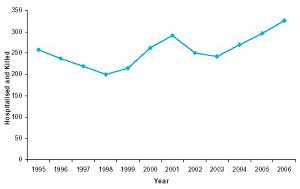 A review of cycling casualties (Tin Tin, Woodward and Ameratunga, 2010) found that the rate of injury had increased in the decade up to 2007, particularly in crashes not involving a motor vehicle, suggesting that more cycling was being done off-road. The rate of traumatic brain injuries had decreased, which is also consistent with less road cycling.

Effect on cycle use

No surveys to track cycle use were carried out to monitor the effect of the helmet law. However, the New Zealand Household Travel Survey (LTSA, 1993-7) shows that cycling decreased by approx 22% between 1993 and 1997.

A hire scheme operated in Auckland from 2007 to 2010 run by NextBikes. Helmets were provided with the bikes by the operator, who said that they were cleaned, checked and replaced regularly. Though adjustable, they were probably of only one size. Over the 3 years, the number of registered users had grown to only 2,500 and there were about 50 hirings per day. This compared with 40,000 users and up to 6,000 hirings per day (within 1 year) in Dublin, which had a similar population and hire scheme but no helmet law. The Auckland scheme closed as it had no public subsidy and could no longer meet its costs. (NZH, 2010)

It is understood that earlier attempts to set up hire schemes in Porirua and Palmerston North in the 1990s foundered due to the helmet law.

A cost-benefit analysis published in 2002 (Taylor and Scuffham, 2002) suggested that there had been a small net benefit from the law for children aged 5 to 12 years, a small disbenefit for children aged 13 to 18 years, and a large disbenefit for adult bicyclists (19+ years).
The results were very sensitive to the cost and life of helmets, helmet wearing rates before the law, and the effectiveness of helmets in preventing head injuries. Thus the net benefit for younger children was primarily because wearing rates for this age group were already 87% before the law, so few new helmets needed to be purchased to comply with the law. The cost of helmets purchased prior to the law was not taken into account. The analysis has been further criticised for being optimistic in its assessment of head injury reductions and for assuming very low costs as result of people quitting cycling due to the law.
Detailed analysis: Taylor and Scuffham, 2002; BHRF, 1237..

Robinson DL, . Costs and benefits of the NZ helmet law. .