Few delegates at this conference need to be convinced of the benefits of cycling, either as an environmentally friendly, pollution free transport, or as healthy exercise.  Indeed, the British Medical  Association reported:  (despite the risk of accidents) "car travel is more deleterious to health unless the  motorist can exercise several times a week by other means that will maintain fitness" (BMA, 1992).   Nowadays, only a minority of the population takes  sufficient exercise and several billions are spent every year on hospital treatment of heart and circulatory  disease, much of which might be prevented by regular exercise such as cycling.  Cycle helmets may be  beneficial if they help reduce the risk of head injury, but many cyclists find them hot or uncomfortable.   Helmet laws might therefore be counter-productive if they discourage cycling sufficiently for the loss of  health and social benefits from reduced cycling to outweigh gains from fewer head injuries.  Here, an  attempt is made to shed light on this difficult question by reviewing available statistics on head injuries  and cycling participation before and after helmet laws were passed in Australia.

Only two states - Victoria and NSW - attempted to measure the effect of the laws on cycling activity by pre- and post-law surveys at the same sites, observation periods, time of year and, where possible, the  same observers.  In NSW, data from identical pre- and post-law surveys were available only for  children.  Both surveys were conducted in excellent weather.  Table 1 shows that the increase in numbers  wearing helmets was only about half the decrease in cyclists counted, with similar outcomes for cycling  in recreational areas, through road intersections, or to school.   Reductions in rural NSW (35%) and in  the Sydney Metropolitan area (37%) were almost identical.  Another survey was carried out a year later,  under fine and generally sunny conditions.   Even fewer cyclists were counted. 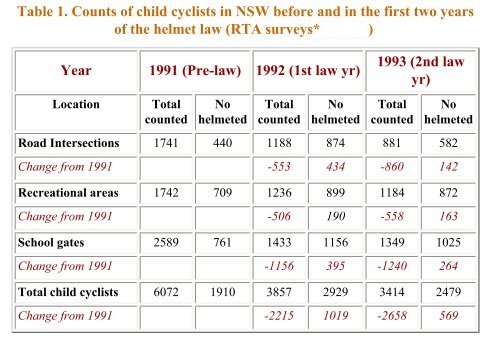 In Victoria, both adults and child cyclists were counted.  The same sites and observation times were used and 82% of sites had the same weather classification.    Overall, 36% fewer cyclists were counted (Figure  1). For sites which were fine in both 1990 and 1991, the reduction was, however, only 24%.  The survey  was repeated the following year, when a bicycle rally happened to pass through one of the sites.   Excluding this site, numbers in the second year were down by 27% on the pre-law survey.  These figures  indicate, as in NSW, that the increase in numbers wearing helmets was less than the overall decrease in  numbers of cyclists.

Attitude surveys confirm the potential of helmet laws to discourage cycling.   A total of 1,210 secondary  school students were questioned as part of the Blacktown Bike Plan.  Of those who had not ridden in the  past week, helmet restriction was the most common reason (33.9%) compared with unsafe (11.8%) or  even not owning a bike (33.8%).  A street survey in the Northern Territory of more than 800 people  found 20% had given up cycling because of the law and a total of 42% had reduced their cycling.  In the  ACT, when 325 cyclists were asked "Would you cycle less if helmets became compulsory?"  90 (28%)  said they would.  In Western Australia (WA), a telephone survey of 254 households in which adults  responded on behalf of themselves and their children found 13% of Perth and 8% of country cyclists had  given up or cycled less because of the law (Heathcote, 1993).   However, when the adult respondents replied for  themselves, a proportion equivalent to 64% of current adult cyclists said they would cycle more if not  legally required to wear a helmet. Thus, apart from the WA telephone survey (suffering from a small  sample size and that parents may not always be aware of a child's true motives), street counts and survey  interviews have both consistently revealed a substantial deterrent of helmet laws on cycling. 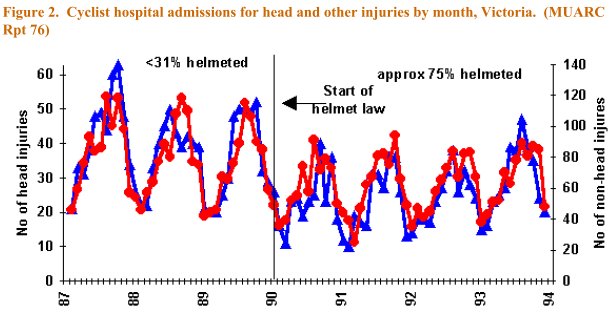 Figure 2 shows hospital admissions of cyclists for head and other injuries in Victoria in the years before and after the helmet law.  Non-head injury admissions (right hand axis of graph) outnumbered those for  head injury by a factor of approximately 2:1, both before and after the law.  Consistent with surveys  indicating reduced cycling, the effect of the law can be clearly seen by a reduction in both head and non- head injury admissions, but, despite a substantial increase in helmet wearing from 31% of cyclists to  75%,  the relative proportions of the two appear little changed.

If the surveys were representative of the effect of the law on cycling participation, then the risk of head  injury would appear to have increased, rather than decreased, because of an increase in accident rates.    Researchers have developed the theory of risk compensation to explain why accidents often appear to  increase  following adoption of a new safety measure.  In many cases, the benefits of the measures are  large and outweigh any effects of risk compensation.  Comparison of head injury and cycling  participation rates following helmet laws in NSW and other places leads to the possibility this is not the  case for bike helmets. 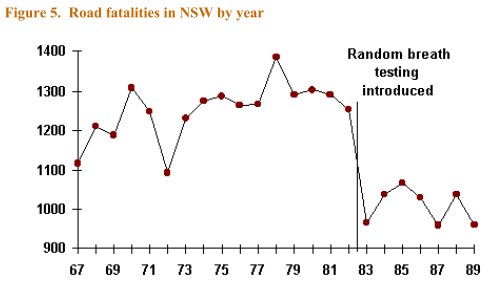 The relatively small  effects of the helmet  laws (except on  numbers of cyclists)  contrasts starkly with  other measures such  as random breath  testing (RBT),  introduced in NSW  in December 1982.  Other recent  measures have  included the highly  successful Transport  Accident  Commission (TAC)  road safety campaign in Victoria which reduced accident costs by AUD 220 million for an outlay of AUD 5.5  million (Powles and Gifford, 1993). Included was a crack-down on speeding and drink-driving via speed cameras and increased  RBT  ('booze busses').  Pedestrian fatalities in Victoria fell from 159 in 1989 to 93 the following year (FORS, 1990).

These initiatives started around the same time as the helmet law.  Comparing the two years before the  helmet law with the following two, the percentage of TAC pedestrian injury claims involving death or  head injury fell by 4.2 from 19.6% to 15.4%  Despite increased helmet wearing from 31%-75%, the  decrease for cyclists injured in collisions with vehicles was 3.1, from 12.0% to 8.9%.  While some of this  may have been due to helmets, the large effect seen for pedestrians, together with comparatively small  effects for cyclists in accidents not involving motor vehicles, makes it plausible that a substantial  proportion of this effect, previously attributed entirely to increased helmet wearing, may, in fact, have  been due to the effective TAC campaign.

The fact that little or no obvious effect can be seen in hospital data does not imply cyclists choosing to  wear lightweight, comfortable, well fitting  helmets, will not benefit, provided they do not ride on more  dangerous roads or take less care.  The relatively small effects from helmet laws must, however, be  contrasted with the large effect on numbers of cyclists and better responses from other road safety  campaigns.