The Bicycle Planning Book (Hudson, 1978) suggests the following explanation: "However, the fact that cyclists’rights are more respected in towns where cycling is prevalent suggests than an increase in the number of cyclists on all roads would condition car drivers to expect and allow for them." At least 95% of cyclist fatalities, as well as the majority of serious head injuries, are caused by bike/motor vehicle collisions. Any factors which reduce driver awareness of cyclists, including reductions in numbers of cyclists motorists see on the roads, may therefore decrease cyclist safety and increase the accident rate. Conversely, increasing driver awareness of cyclists has been shown to decrease the accident and injury rate. This was demonstrated by a ‘Think Bike’ TV advertising campaign aimed at drivers in Anglia, UK, which resulted in measurable reductions in accidents to cyclists. 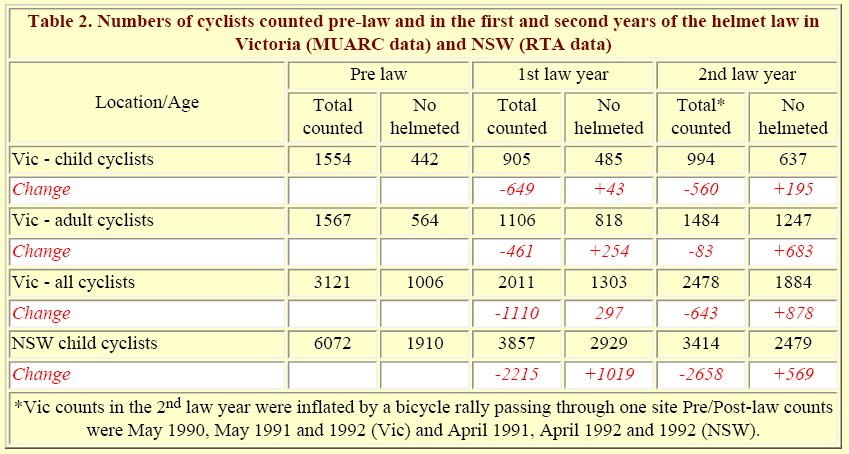 In the light of such evidence, it is useful to investigate the effect on accident rates of bicycle helmet laws, which reduced cycling and so perhaps driver awareness. Extensive pre- and post-law counts of numbers of cyclists, at the same sites and the same time of year were carried out for all cyclists in Victoria and for children in New South Wales (NSW). The survey sites in Victoria were chosen as a representative sample of the road system. 29% fewer adults and 42% fewer child cyclists were counted, 36% fewer overall. In the second year, a bicycle rally happened to pass through one of the survey sites, making it difficult to estimate the true reduction in that year. Unfortunately, counts in other states tended to use different sites, or failed to count at the same time of year, so cannot be used to investigate the change in accident rates relative to the amount of cycling.

One interesting statistic, immediately obvious from Table 2, is that the decrease in numbers of cyclists counted is very much larger than the increase in helmet wearing. This suggests that the main effect of the laws was to discourage cycling, rather than to encourage helmet wearing. Given the effect of increasing numbers of cyclists on reducing accident rates in WA (Table 1), reductions of this magnitude in cycling activity in NSW and Victoria could significantly affect accident rates.

In NSW, the survey sites were not chosen specifically as a representative sample. However, consistent across-theboard reductions in numbers counted were found at road intersections, at school gates, in recreational areas as well as in Sydney, inner rural and outer rural areas. This stronly suggests that an almost identical result would have been obtained whatever the choice of sample sites. The reductions in numbers counted (2215/6072) = 36% and (2658/6072)= 44% in the first and second years of the law are therefore realistic estimates of the reduction in cycling. Table 3, comparing numbers of cyclists hospitalised for head and other injuries, strongly suggests that, as the number of child cyclists declined in NSW, despite increased percentage helmet wearing with the law, the rate of head, as well as other, injuries increased relative to the amount of cycling.

For Victoria, the situation is complicated by the effective road safety campaign introduced by the Transport Accident Commission a few months before the bicycle helmet law. The success of this campaign was noted in the British Medical Journal (Powles and Gifford, 1993), who reported that the outlay of GBP 2.3 million for the campaign resulted in savings of over GHP 100 million in 1990 alone in reduced cost of accidents.

Until the campaign started at the end of 1989, numbers of fatalities for both pedestrians and cyclists were declining at a relatively modest rate (Graph 1, left). The introduction of booze buses and speed cameras had a dramatic effect. Numbers of motorists photographed exceeding the speed limit plus threshold margin fell from 22.8% in December 1989 to an all time low of 3.8% in June 1993. Pedestrian fatalities fell immediately by 42% from 159 in 1989 to 93 the following year (see graph on right).

As shown in Table 4, pedestrian fatalities fell by 44% in the first 3 full calendar years of the law and cyclist fatalities by 47%. However, there is no reason to believe there was any decline in pedestrian activity. In contrast, numbers of cyclists declined by 36% in the first year of the helmet law. After adjusting for the decline in cycling, the data strongly suggest that post-law fatality rates increased for cyclists, relative to pedestrian fatalities.

The above anomalies in accident data, suggesting an increase in accidents and even head injuries imply that a full investigation of accident rates following helmet laws is warranted. Delia Hendrie (Roadwatch, University of Western Australia) has tabulated the percentage of head injuries suffered by various road user groups before and after the helmet law (Graph 2). These data again suggest that the helmet law has had a very minor impact on the percentage of cyclists suffering head injuries. Other factors are clearly more important, such as enforcement of speed limits and drink-driving laws, and encouraging motorists to look out for cyclists especially at intersections.

In fact, it has been shown that head injuries are three to five times more common in cyclists involved in car/bike collisions than those involved in bike-only accidents. As already noted, nearly all fatalities and the majority of serious head injuries to cyclists happen as a result of bike/motor vehicle accidents. The best way to reduce cyclist head injuries is to make the roads safer and to help cyclists avoid accidents by teaching them the skills of roadcraft and defensive cycling. Helmets have only a very minor part to play. In the report 'Cycle Helmets - the Case For and Against' (Hillman, 1993) it is commented that the fatality rate per kilometre travelled in Britain, was respectively, two and a half and three and a half times higher than in the Netherlands and Denmark, countries where few people wear helmets and the subject is low on the political agenda. As shown in Graph 2, the benefits of helmet laws are too small to be detectable, and pale into insignificance compared the previously mentioned difference in injury and fatality rates. Other factors such as those responsible for the difference in fatality rates per kilometre between the UK and Denmark or Holland are considerably more important. Those responsible for cyclist safety should concentrate on these major factors, rather than helmets.

Moreover, by discouraging cycling, the helmet law has had a considerable detrimental effect on health and fitness. It has been estimated that life years gained due to the healthy exercise from cycling, even without a helmet, have been estimated in the UK to outweigh those lost by 20:1 The risk from being sedentary is similar in magnitude to smoking 20 a day. If another 40% of Australians undertook regular, moderate and effective exercise the community would save AUD 2.4 billion/year in reduced costs associated with heart disease, low back pain, absenteeism and workplace productivity (Roberts, Owen, Lumb and MacDougall, 1996).

In addition, as shown in Table 4, the decline in numbers of cyclists appears to have resulted in increased bike/motor vehicle/collisions relative to the amount of cycling. Thus the overall effect of the law may well have been detrimental to the safety of those who continued riding, as well as to the health and fitness of those who gave up or reduced their cycling because of the law. The costs of the helmet law - AUD 18 million in Western Australia for helmets and pre-law promotion could be contrasted with the speed camera/anti-drink-driving campaign, introduced in Victoria about the same time as the bike helmet law, and which saved the community AUD 200 million in 1990 for just AUD 5.5 million. The latter was highly effective and had clear benefits to the community in terms of reduced fatality and injury rates. Despite its higher cost, the helmet law was highly ineffective. The benefits in terms of head injuries were almost undetectable (Graph 2) but the costs were considerable in terms of reduced health and fitness in those giving up cycling, as well as potentially increased accidents relative to the amount of cycling.