A helmet saved my life!

It's not surprising that people who've been through a crash on their bike and escaped serious consequences but found helmet damage often believe strongly that the helmet has “saved their life”. However, the number of helmet users with this experience seems very much greater than the number of bare-headed cyclists who ever suffer a head injury. This suggests that the reality might not be so straightforward.

The principal protection mechanism in a cycle helmet is the polystyrene foam, or styrofoam, that covers the head. When this receives a direct impact force, the styrofoam is intended to compress and in this way spread and reduce the force that is passed onto the skull, thus reducing linear accleration of the brain.

However, it is common for helmets to break without the polystyrene foam compressing at all. A major helmet manufacturer collected damaged childrens' helmets for investigation over several months. According to their senior engineer, in that time they did not see any helmet showing signs of crushing on the inside (Sundahl, 1998). Helmet foam does not 'rebound' after compression to any significant extent. If the styrofoam does not compress, it cannot reduce linear acceleration of the brain. The most protection that it can give to the wearer is to prevent focal damage of the skull and prevent minor wounds to the scalp. It is not likely to prevent serious brain injury. 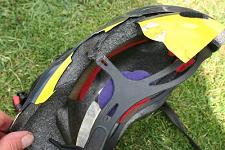 This helmet has split along the ventilation slots, which is common. However,  the thickness of the styrofoam has not been compressed.
It most likely gave no more than superficial protection.

Some dissipation of impact force might occur from the action of a helmet breaking, but in most cases this is likely to be small. Helmet standards require the foam to start to compress at a level of force less than that which might be expected to lead to brain injury. While it is known that many helmets do not actually meet the standards to which they are supposed to be accredited (BHRF, 1081), it follows that if the styrofoam does not compress at all, the direct linear force on the helmet was minimal and it's quite possible that the cyclist would not have received any injury if the helmet had not been worn.

If the styrofoam is compressed, it still doesn't prove that a helmet had a protective effect. This can be demonstrated with a fist and a brick wall.

If you 'shadow box' at the wall but carefully stop your fist about 50 mm before it reaches the wall (be sure it's limited by your arm's length), no harm will come to your fist. If, without changing your position, you slip a 75 mm thick piece of styrofoam against the wall and repeat the punch, you'll get compressed (and cracked) styrofoam and false 'evidence' that it saved you from harm. In other words, many impacts of helmets would be near misses with bare heads.

In high impact crashes, such as most that involve motor vehicles or fixed objects like concrete barriers and lamp posts, the forces can be so great that a helmet will compress and break in around 1/1000th of a second. The absorption of the initial forces during this very short period of time is unlikely to make a sufficient difference to the likelihood of serious injury or death. It is for this reason that helmets contain stickers noting that no helmet can prevent all head injuries.

Cracks or tensile failure in helmets may be the result of a sideways or oblique, rather than linear, force on the helmet. Helmets are not tested nor certified for this kind of impact. However, if the impact occurs without any compression of the foam, it suggests that most of the force was parallel to the surface of the helmet and not directed towards the head. As the surface of a helmet is some small distance from the surface of the head, again the wearer may have suffered no injury at all if a helmet had not been worn.

Most crashes leading to death or long-term disability involve rotational, or diffuse, forces. These differ from direct, or linear, forces in that it is insufficient to protect just the surface of the skull to prevent harm. It is necessary also to prevent the brain moving within the skull. Current cycle helmets are not designed to mitigate rotational forces and therefore offer very little protection against most life-threatening injuries (BHRF, 1039).

It's not a simple matter to draw conclusions about the benefit a broken or deformed helmet might have provided in a crash. However, the fact that serious injury to unhelmeted cyclists is as rare as helmet damage is common, suggests that most of the claims of benefit from damaged helmets are likely to be exaggerated.

A better indication of the effectiveness of helmets comes from trends in fatal and serious injuries across whole populations of cyclists. Such data shows no reliable evidence from any jurisdiction that the risk of life-threatening injury has been reduced through the use of helmets.

For example, in the state of Western Australia where bicycle helmets have been mandatory for all ages since July 1992, the annual cyclist death toll from 1987 to 1991 (pre-law) averaged 7.6 fatalities per year. From 1993 to 1997 (post-law) it was 6.4 fatalities per year, representing a 16% reduction (Meuleners, Gavin and Cercarelli, 2003). However, Government cycling surveys show cycling declined in Western Australia by approximately 30% during the 1990s following mandatory helmet law enforcement (WA, 1; WA, 2). Thus, relative to cycle use, fatalities went up, not down.

National data from the United States (1991-2001) similarly shows lack of benefit (BHRF, 1041).  A review of worldwide research for the UK Department for Transport found no statistically reliable evidence that cycle helmets had proved effective in reducing head injury (Hynd, Cuerden, Reid and Adams, 2009).

There is a good deal of circumstantial evidence that helmeted cyclists are more likely to crash and in the process to damage their helmets. Data from one study (Wasserman et al, 1988) suggests that those wearing a helmet are more than 7 times likely to hit their (helmeted) heads than bare-headed cyclists, but this study may not be reliable due to the small numbers involved and self-reporting bias. Another study (Erke and Elvik, 2007) reports that helmet wearers have a 14% higher risk of injury per km cycled than those who do not wear helmets.

The next time you see a broken helmet, suspend belief and do the most basic check – disregard the breakages and look to see if what's left of the styrofoam has compressed. If it hasn't, you can be reasonably sure that it hasn't saved anyone's life.