Fold-up helmet to save Melbourne bikes?

In a bid to save Melbourne's troubled bike share scheme, the state government is considering providing collapsible helmets that could fold up and be carried in a briefcase or handbag.

The scheme's operator, RACV, will also hand out free conventional bike helmets next month and VicRoads has confirmed it is working with RACV on a range of other helmet options, including the collapsible variety.

Figures obtained by The Sunday Age show that usage of the new scheme - introduced late May - remains low and declined last month. 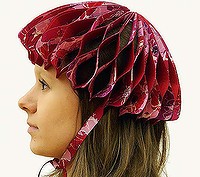 The Australian and French products