CONCLUSIONS. The bicycle-related mortality rate in children 1 to 15 years of age has decreased significantly, which may be attributable in part to helmet legislation. A similar reduction for bicyclists 16 years of age through adulthood was not identified. These findings support promotion of helmet use, enforcement of the existing law, and extension of the law to adult bicyclists.

These conclusions are straightforwardly wrong. During the period of study (1991 – 2002), helmet use by Ontario children increased after the 1995 law came into effect, but then fell back to pre-law levels by 1999 (Macpherson et al, 2006). This is because the law was not enforced (Macpherson, 2005). There was thus no net change in helmet use in the period of study. The reduction in child cyclist deaths observed cannot have been related to increased helmet use.

The authors report helmet use by children selectively. In this way, they create the impression that helmet use was sustained post-law, when it was not. The critical sentence in their paper reads: "In the same urban community.... helmet use exceeded 65% in the 2 years after the introduction of legislation and reached 85% in high income areas 6 years after the introduction of legislation". This is an extract from full results that have been reported (Macpherson et al, 2006). It seems extraordinary that the authors could extract a sub-trend from a chart (i.e. the small minority of children in high income areas) without reporting the primary trend.

The decline in pedestrian deaths closely correlates with the decline for cyclists. Data from Ontario Road Safety Annual Reports (ORSAR) (Ontario, RS) 1993-2004 show that deaths of children declined steeply, both for cyclists and pedestrians, while adult deaths declined only slightly. Due to the low number of cyclist deaths, the data for cyclists do not show smooth trends, especially for subgroups such as children. The three year averages for 1993-1995 and 2002-2004 were compared for this review: 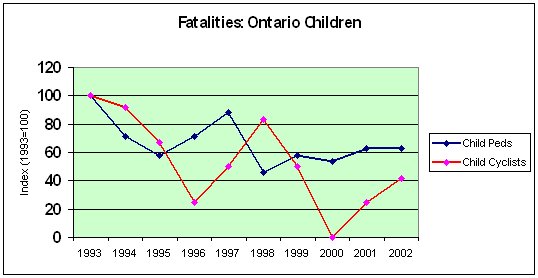 The presentation of the actual child fatality data (indexed to 1993 for ease of comparison) reinforces the conclusion that there was no relation of helmet wearing to fatalities. It is ironic that child cyclist deaths actually spiked in the years 1996-1998, the period of highest helmet use after legislation, whereas deaths dropped sharply 1998-2000 as helmet use declined to pre-law levels. It is not proposed that there is a causal link; the number of child cyclist deaths is extremely low and prone to large fluctuations. But it is clear enough there is no pattern linking reduced deaths to higher rates of helmet use during 1996-1998.

In conclusion, the large fall in deaths of child cyclists must actually be due to non-helmet factors, such as reduced exposure, better vehicle design and street management programmes to reduce vehicle speeds. These also benefited child pedestrians.

Other flaws in the presentation of evidence

The authors make reference to early case-control studies, such as those in the Cochrane Review of bicycle helmet effectiveness. They ignore the effects of mass helmet use in the real world. The Cochrane Review reports large reductions in serious head injuries from helmet use, yet real world outcomes show no noticeable change in serious head injuries with mass helmet use. In recent years, the poor reliability of case-control studies, and systematic reviews based on them, has caused disillusion in the epidemiology community (Lawlor, Smith and Ebrahim, 2004; Smith, 2004).

The outcomes of helmet laws in New Zealand and the states of Australia were reviewed (Robinson, 2006), and no noticeable reduction in serious head injuries could be observed, after natural trends and declines in cycling were accounted for.

The contradiction of case-control studies by real-world outcome is almost certainly due to socio-economic factors. It has been reported that helmet wearing by children is strongly influenced by social class, with children of low-income households being only 40% as likely to wear a helmet, compared to children from high income households (Macpherson et al, 2006). It is also well recognised that children in low-income areas suffer disproportionately from injuries inflicted by motor traffic (Edwards et al, 2008). The confounding in the case-control research can be seen directly in this summary drawn from the largest dataset ever gathered (3,900 casualties) for a case-control study of cycle helmets (Thompson, Rivara and Thompson, 1996):

These results apparently show that protective effect increases sharply with severity of injury. This is implausible and in any case is refuted - as noted previously - by experience. However, this is the pattern that would be expected if lower socio-economic class correlates - as it does - with more severe accidents and not wearing a helmet. A large "helmet effect" would be observed even with helmets of tissue paper.

The above dataset forms the heart of the Cochrane Review of Bicycle Helmet Effectiveness (Thompson, Rivara and Thompson, 2002-9). The review was carried out by the authors of the original research. They have never commented on this aspect of their data.

The authors state: "Children are at risk for bicycle-related fatal injuries". No data are presented to assess the risk relative to other daily activities. Cycle helmet programmes and legislation have never been justified by evidence that cycling is particularly hazardous or a major cause of head injury. All such programmes rest for their credibility upon a deep- seated stereotype that cycling is "dangerous". In fact, risk assessments show that cyclists face everyday risks comparable to pedestrians and drivers (Wardlaw, 2002; Krag, 2005). In Canada, the rate of child head injury admission due to cycling accidents is exceedingly low. National data (from CIHI) show the annual rate was 11.5 admissions per 100,000 children per year in 1997/98, or 1 case in 8,700 annually. This level of risk does not justify helmet legislation, or promotion of helmets, at least not for utility cycling.

Further analysis shows that the principal factor affecting risk is the popularity of cycling (Wardlaw, 2002; Jacobsen, 2003); where cycle use increases, the risk per cyclist decreases.

Histories of the effects of enforced helmets laws are available (BHRF, 1096).

The authors have analyzed a reduction in child casualties after the passage of a bicycle helmet law. They have failed to correlate this with control group information (the closely-corresponding reduction in casualties to child pedestrians), and they have failed to use relevant figures showing that the law had no long-term effect on the use of bicycle helmets (instead selecting only the figures for a small and untypical minority). Their work is not merely valueless, it claims the exact opposite of what the figures actually show.

Helmet laws: what has been their effect?. .

Macpherson A, School of Kineseology, Toronto. Communication with author, reporting City of Toronto Police Services advice that no child cyclist was ticketed for violation of the helmet law. Dec 2005. .