Vancouver acknowledges that helmet law could scupper bike-share
Responding to comments from the European Cyclists' Federation that the province's
read more ...

Sydney bike hire awaits helmet law exemption
The City of Sydney is considering a bicycle hire scheme, but only if it wins an e
read more ...

Wrench thrown into bike-sharing plans
The City of Vancouver wants to roll out a bike-share scheme like others that have
read more ...

Brisbane bikes off to slow start
Bike hire in Brisbane started on October 1 and in the first month and a half (to
read more ...

Dublin bike scheme set for tenfold expansion
So successful has been the Dublin bike hire scheme that it is to be expanded from
read more ...

(Almost) A world-wide revolution in transport

Throughout the world, towns and cities are competing with each other to introduce bike hire schemes in order to improve the quality of life by getting more people cycling. The outstanding success of the Vélib' scheme in Paris (Vélib), launched in 2007, has unleashed an envy and enthusiasm to follow suit, unprecedented in cycling history.

Almost all of the schemes have been great successes, creating new mass audiences for cycling to an extent unrivalled by any other form of promotion. The new city cyclists are achieving much appreciated benefits in their mobility and health and the cities themselves are benefiting from all the environmental gains that come from more cycling. What's more, there have been very few reports of serious casualties among the people using the hire bikes.

Alas, exceptions to the rule are cities that are bedevilled with helmet laws. None of these places has yet made a success of hiring bikes and some cities have abandoned or modified helmet laws to achieve better results.

Dublinbikes started in 2009 with 500 bikes and has been one of the world's most successful schemes, achieving over 2 million users in just 20 months (city population 1.7 million). On 13th October 2011, the bikes were used for 7,052 journeys in a day, meaning that each bike was rented an average of 13 times. JC Decaux (the operator) and Dublin City Council won the 'Best Green Contribution to Dublin Life' award to recognise these achievements. There are plans to increase the scheme size tenfold.

London's bike hire, nick-named Boris Bikes after the Mayor who is a great advocate of cycling, launched in 2010 with 6,000 bikes and an investment of GBP 75m. Within a year, 6 million journeys had been made by nearly one million people (Observer, 2011). 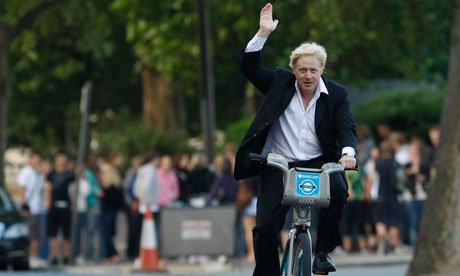 Countries with helmet laws are losing out on the benefits from the hire bike revolution. None of the successful schemes requires cyclists to use a helmet and none are provided. As well as the practical difficulties of offering helmets to users at each bike station in a sufficient range of sizes, there are health and hygiene issues that make sharing helmets unacceptable.

Head lice can live two days away from a host and are endemic in the western world, especially among children. Fungal scalp infections ("tinea capitis") spread by contact. They are usually caused by fungi of the genera Microsporum and Trichophyton. They may be serious ("kerion") and can result in hair loss (alopecia) or even major skin loss. Then there are the less tangible but real fears people have about not wanting to wear an item of second hand clothing, especially one that has not been washed. Helmets left for days exposed to the elements could grow mould, especially in humid climates.

Just as important, city bike schemes are the most successful if they are able to capture impromptu journeys on demand, with no pre-planning and the minimum of fuss for the client. The need to carry a helmet around just in case you will want to hire a bike, or to have to mess about adjusting a hired helmet to fit, would kill off a large part of the market.

In Paris, Barcelona, Dublin and London, no more than a few percent of shared bike users wear a helmet. In Toronto, a survey of Bixi bike users found 20% to be wearing helmets, but that is still much less than the 51% of other cyclists who wore a helmet (Bonyun, Camden, Macarthur and Howard, 2012).

Washington DC consciously decided to forget about helmets because of these difficulties and so that it could get as many people as possible using its bikes (Time, 2008).

Melbourne City Council in Australia introduced Melbourne Bikeshare in 2010 but six months later the bikes were being little used with under 300 journeys a day (The Age, 2010b). Users have to bring their own helmet or buy or rent one from nearby stores at an additional AUD 5 per day. The council subsidises each helmet with a further AUD 8. In a bid to increase use, the council considered the use of collapsable helmets (The Age, 2010c). Despite having a bigger population than most cities, Melbourne has the worst bicycle hire rate in the world numerically and/or as a percentage of available bikes.

Next Bike in Auckland, New Zealand folded in 2010, being unable to meet its costs.Over its 3 year existence, NextBike said that the number of registered users had grown to 2,500 with up to 50 bikes being hired a day (NZH, 2010). By comparison, Dublin is only a little larger in population than Auckland (1.7 million people compared with 1.4 million in Auckland) and its bike hire scheme has attracted over 40,000 registered users in just one year with over 7,000 bikes being hired in a day. The principal difference between the cities is that there is no helmet law in Dublin.

Vancouver was keen to have a City Bike scheme in place before it hosted the 2010 Winter Olympics, but in 2012 it was still wrestling with the helmet problem. Three options being considered are that users would have to pull a shared helmet from a rack, bring their own, or that the law be waived for system users. According to a spokesman for would-be scheme operator TransLink, "I think a lot of people are going to be really reluctant to share helmets." (Tri-City News, 2008) On the other hand, some prominent politicians are now campaigning for the state's helmet law to be rescinded (Dixon, 2012).

In 2010, Mexico City decided to scrap a helmet law that it had only introduced a year earlier. One reason was the realisation that its proposed bike hire scheme was unlikely to succeed if users had to wear a helmet. On the same day as the repeal of the helmet law, the first public bicycle system, Ecobici, was launched, as part of the Government's plan to increase the number of cycling commuters. (ECF, 2010)

Tel Aviv also hesitated to launch bike hire with its all-ages helmet law in place. After much deliberation, the decision was taken to modify the law so that it no longer applies to adults in towns.  Since then it is reported that a very successful bike hire scheme has been launched with few hirers wearing helmets.

Other cities where there are helmet laws face similar problems. Helmet laws have reduced cycling wherever they have been enacted and enforced. It will be a further bitter blow for their citizens' health and the environment if they now prevent whole communities from joining the City Bikes revolution.

The desire to have hire bikes in their towns is forcing many citizens and politicians in helmet law countries to think again about whether their laws are a good idea. Mayors in Sydney, Fremantle and Perth have called for laws to be withdrawn or modified to allow bike hire schemes to go ahead. (SMH, 2012; WAust, 2012; WAust, 2012b)

Although comprehensive data is not available, there have been very few reports of serious injuries befalling the users of hire bikes. There has certainly been no justification at all for the scaremongering that has sometimes preceded the start-up of new schemes, when helmet advocates have warned of mass death and injury if users do not wear helmets.

The only city known to have suffered fatalities is Paris where there have been particular issues with its mix of traffic. To mid 2012, there had been 7 Vélib' deaths but this needs to be seen in the context of 138 million trips having been made. As city street travel goes, that is a very low risk for any mode. Most of the deaths have been as a result of cyclists conflicting with right-turning buses and lorries, against which helmets offer no realistic protection. As time has passed the rate of fatalities has gone down and there were none at all in 2011 or the first half of 2012.

By May 2011, Dublin had seen over 2 million hirings with just two injuries to cyclists using the bikes that required hospital attention. Both of those people left hospital within 24 hours. The increasing popularity of cycling in Dublin is making cycling in the city safer than ever before. In 1997, 24 cyclists died; in 2009 only three. There are many more cyclists now than a decade ago.

In London's first year of operation, 6.2 million journeys were made by one million people. There were only 70 slight and 9 serious injuries, none of which were life-threatening.  (Observer, 2011; TfL, 2012)

Montreal introduced its Bixi sharing scheme in late 2009. Within 12 months, 3.5 million kilometres had been cycled on the bikes, with just five minor injuries to riders.

Washington DC's Capital Bikeshare was used for 330,000 trips in its first 7 months, with only 7 crashes of any kind, none of which involved serious injury. (Flanzig, 2012)

A study of users of the Barcelona Bicing scheme (to which 11% of the city's residents subscribe) found that health benefits of using the hire bikes were 77 times greater than the risks (Rojas-Rueda et al, 2011), with a likelihood of mortality well below that of car drivers. Speaking on BBC Radio, Professor Nieuwenhuijsen, one of those who carried out the research, explained that cycling had been found to be very low risk, even after negative factors such as pollution and crashes were taken into account. What's more, the professor noted, "no one in Barcelona wears helmets".

Experience in Paris suggests that hire bikes are less likely to be involved in crashes than user's own bikes. In 2009, Vélib’ riders were responsible for one-third of all bike trips in Paris but were involved in only one-fourth of all traffic crashes involving a bicycle.

In London, analysis by Transport for London has shown that hire bike users are 2 to 3 times less likely to suffer injury than other cyclists, although they are much less likely to wear helmets (perhaps by a factor of 10) and many are tourists unfamiliar with the bikes, London traffic or, in some cases, riding on the left side of the road. (TfL, 2012)

In Washington DC, the crash rate of Capital Bikeshare users is only about 12% that of bike owners (Flanzig, 2012). In all cases, the actual likelihood of a crash is very low.

Peñalosa A, . Repeal of the helmet law in Mexico City. .

Estimates of collision rates for cycle hire bicycles and all pedal cycles. Transport for London, 2012.

Fremantle in call for no-helmets trial. West Australian, 11 May 2012.